In my CppCon 2016 Trip Report I mentioned Herb Sutter's Plenary, and his deferred reclamation library. The problem to be solved is that some data structures cannot be represented as a DAG, where each node in the structure has a clear owner; these data structures are general graphs, where any node may hold a pointer to any other node, and thus you cannot say that a node is no longer needed just because one of the pointers to it has been removed. Likewise, it is possible that there may be a whole segment of the data structure which is no longer accessible from outside, and the only remaining pointers are those internal to the data structure. This whole section should therefore be destroyed, otherwise we have a leak.

In the data structure shown below, the left-hand set of nodes have 3 external pointers keeping them alive, but the right-hand set are not accessible from outside, and so should be destroyed. 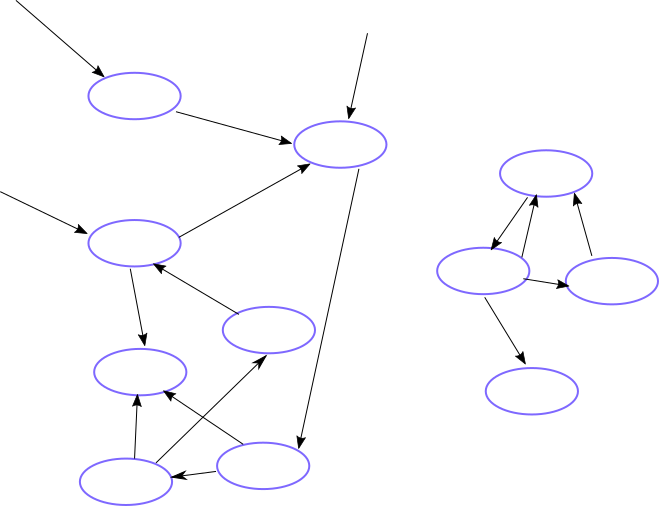 Herb's solution is to use a special pointer type deferred_ptr<T>, and a special heap and allocator to create the nodes. You can then explicitly check for inaccessible nodes by calling collect() on the heap object, or rely on all the nodes being destroyed when the heap itself is destroyed. For the details, see Herb's description.

One thing that stood out for me was the idea that destruction was deferred — nodes are not reclaimed immediately, but at some later time. Also, the use of a custom allocator seemed unusual. I wondered if there was an alternative way of handling things.

I've been contemplating the issue for the last couple of weeks, and come up with an alternative scheme that destroys unreachable objects as soon as they become unreachable, even if those unreachable objects hold pointers to each other. Rather than using a custom heap and allocator, it uses a custom base class, and distinct pointer types for internal pointers and root pointers.

My library is also still experimental, but the source code is freely available under the BSD license.

The library provides two smart pointer class templates: root_ptr<T> and internal_ptr<T>. root_ptr<T> is directly equivalent to std::shared_ptr<T>: it is a reference-counted smart pointer. For many uses, you could use root_ptr<T> as a direct replacement for std::shared_ptr<T> and your code will have identical behaviour. root_ptr<T> is intended to represent an external owner for your data structure. For a tree it could hold the pointer to the root node. For a general graph it could be used to hold each of the external nodes of the graph.

This is made possible by the internal nodes deriving from internal_base, much like std::enable_shared_from_this<T> enables additional functionality when using std::shared_ptr<T>. This base class is then passed to the internal_ptr<T> constructor, to identify which object the internal_ptr<T> belongs to.

This actually has an advantage over using std::shared_ptr<Node> for the links in the list, due to another feature of the library. When a group of interlinked nodes becomes unreachable, then firstly each node is marked as unreachable, thus making any internal_ptr<T>s that point to them become equal to nullptr. Then all the unreachable nodes are destroyed in turn. All this is done with iteration rather than recursion, and thus avoids the deep recursive destructor chaining that can occur when using std::shared_ptr<T>. This is similar to the behaviour of Herb's deferred_ptr<T> during a collect() call on the deferred_heap.

local_ptr<T> completes the set: you can use a local_ptr<T> when traversing a data structure that uses internal_ptr<T>. local_ptr<T> does not hold a reference, and is not in any way involved in the lifetime tracking of the nodes. It is intended to be used when you need to keep a local pointer to a node, but you're not updating the data structure, and don't need that pointer to keep the node alive. e.g.

Warning: root_ptr<T> and internal_ptr<T> are not safe for use if multiple threads may be accessing any of the nodes in the data structure while any thread is modifying any part of it. The data structure as a whole must be protected with external synchronization in a multi-threaded context.

The key to this system is twofold. Firstly the nodes in the data structure derive from internal_base, which allows the library to store a back-pointer to the smart pointer control block in the node itself, as long as the head of the list of internal_ptr<T>s that belong to that node. Secondly, the control blocks each hold a list of back-pointers to the control blocks of the objects that point to them via internal_ptr<T>. When a reference to a node is dropped (either from an root_ptr<T> or an internal_ptr<T>), if that node has no remaining root_ptr<T>s that point to it, the back-pointers are checked. The chain of back-pointers is followed until either a node is found that has an root_ptr<T> that points to it, or a node is found that does not have a control block (e.g. because it is allocated on the stack, or owned by std::shared_ptr<T>). If either is found, then the data structure is reachable, and thus kept alive. If neither is found once all the back-pointers have been followed, then the set of nodes that were checked is unreachable, and thus can be destroyed. Each of the unreachable nodes is then marked as such, which causes internal_ptr<T>s that refer to them to become nullptr, and thus prevents resurrection of the nodes. Finally, the unreachable nodes are all destroyed in an unspecified order. The scan and destroy is done with iteration rather than recursion to avoid the potential for deep recursive nesting on large interconnected graphs of nodes.

Note: only dropping a reference to a node (destroying a pointer, or reassigning a pointer) incurs this cost. Constructing the data structure is still relatively low overhead.

Please let me know if you have any comments on my internal pointer library, especially if you have either used it successfully, or have tried to use it and found it doesn't work for you.

i am impressed by the quality work being displayed here having lots of meaningful posts written here!!!

Reminds me a bit of the solution I came up with for the regex objects in Boost.Xpressive, which I describe here: <http://bit.ly/2dC5ixu>. Is cleanup guaranteed nothrow (no-alloc) with your scheme?

@Eric: Thanks for your comment. I hadn't seen your scheme for regex tracking, it does look similar at first glance. I'm interested to look at the code now --- I thought about the idea of using the different pointer types to keep track of reachability more cheaply, but didn't get anywhere.

No, my implementation doesn't guarantee no-throw cleanup; currently it builds a pair of vectors holding pointers it has processed when checking for reachability, and pointers that still need checking. It's possible that the allocation for these could be moved earlier.

I'm sure the code can be improved, maybe dramatically, but I wanted to write it up while the idea was fresh in my mind.

Aren't weak pointers already sufficient for the job? Java did it that way AFAIK.

Java has implicit Garbage Collection, so doesn't need any of this.

Truly an awesome post.I really like it.I wanna tell you that we are providing discount coupon here.If you want to create another blog like this,then visit our website.Here you find some discount coupon through Justhost.Thank you.